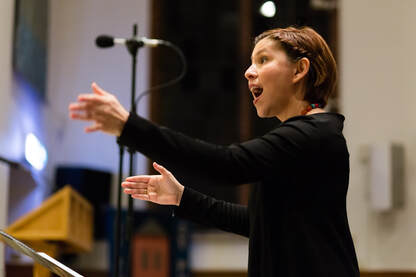 Artistic Director
Mariel﻿a Añazco
Born in Machala, Ecuador, Mariela completed a Music Degree in Singing with honors at Rimsky Kórsacov Conservatoire in Guayaquil. Starting in 2007 she studied choir conducting in Argentina with Antonio Russo at the National Conservatoire in Buenos Aires and baroque singing with Silvina Sadoly.  She sang at the Buenos Aires Orfeón, Trilce Ensemble and Cámara XXI. Mariela moved to the Netherlands in 2010 following her dream to focus her career on Early Music both as a singer and choir conductor. She participated in courses and masterclasses with early music specialists such Cristina Miatello, Rosa Dominguez and Rebecca Stewart. She studied choir conducting at the Utrecht Conservatoire with Rob Vermeulen, is member of the vocal ensemble La Cappelletta and is the artistic leader of the Strozzi Female Choir of The Hague.  Mariela has extensive stage experience. She has perfomed  as a singer and choir condutor in México, Cuba, Ecuador, Argentina, Spain and the Netherlands. 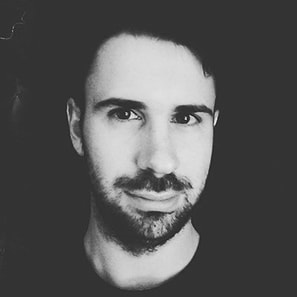 Pianist
​Sebastiano Evangelista
Sebastiano Evangelista graduated with full marks and honors from the Conservatorio Statale di Musica “F.A. Bonporti” in Trento (Italy) as Piano Accompanist, and finished his Masters at the Koninklijk Conservatorium of Den Haag (Netherlands), where he studied Composition with Martijn Padding and Guus Janssen, and Piano with Gerard Bouwhuis.

Active both as performer and composer, he won in 2011 the third prize at the “Città di Bardolino” Piano Competition. His concert activity include mostly collaborations with singers and choirs.

As a composer, his works have been performed by ensemble and orchestras such as the Residentie Orkest, New European Ensemble and Kluster 5. His small opera “Hoofd maal tijd” was performed at the Nationale Opera & Ballet of Amsterdam, as part of the Opera Forward Festival 2017. 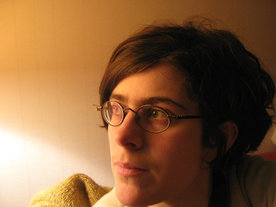 Répétiteur
Rebecca Ruiz Hoyo
Rebecca Ruiz Hoyo attained a masters degree in Visual Arts. She has been involved in music since early age, singing along with the radio anything from pop to rock, blues, jazz, chanson, joining a while in a flemish rock band.  This way she developed a good ear for harmonics and learned to play the guitar and piano at a basic level, as an accompaniment while singing. The last years she plunged into the world of early music and didn't get out of it quite yet. Not always having been keen on reading scores, singing in a vocal renaissance ensemble, Cappella Stella Maris, she (re)discovered the joy of singing from scores,  especially original medieval and renaissance notation. At the moment she's taking singing lessons and starting a vocal ensemble for early polyphonic music